Darkness Visible: A Memoir of Madness by William Styron 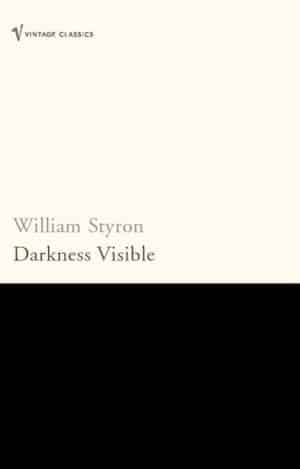 This is only a short book but it is a harrowing tale of one man’s plunge into the abyss of depression. I picked it up via a comment in Christopher Hitchen’s autobiography. Styron spends quite a bit of time emphasising just how utterly inexpressible depression is as a disorder. How the language doesn’t exist and the words just don’t match up to the horror. Styron himself is quick to point out that an individual experience is just that, unique and idiosyncratic, but I’m certain there will be some deep resonances for many people in this slender volume.

I should add that the doctors don’t fare well yet Styron is admirably restrained, even generous, in his descriptions. Styron is right to highlight the complexity of predisposing factors and triggering events but the iatrogenesis of the benzo prescribing is very ugly and I blush to read of it. Some of the medical perspective is of its time as Styron’s depression, so starkly painted in Darkness Visible°, affected him in the 1980s. Much of it remains frighteningly pertinent.

“The most honest authorities face up squarely to the fact that serious depression is not readily treatable.”

“Frighteningly, the layman-sufferer from major depression, taking a peek into some of the many books currently on the market, will find much in the way of theory and symptomatology and very little that legitimately suggests the possibility of quick rescue.”

“The intense and sometimes comically strident factionalism that exists in present-day psychiatry—the schism between the believers in psychotherapy and the adherents of pharmacology—resembles the medical quarrels of the eighteenth century (to bleed or not to bleed) and almost defines in itself the inexplicable nature of depression and the difficulty of its treatment.”

“This is to say more specifically that instead of pleasure—certainly instead of the pleasure I should be having in this sumptuous showcase of bright genius—I was feeling in my mind a sensation close to, but indescribably different from, actual pain.”

“Nonetheless, for over seventy-five years the word has slithered innocuously through the language like a slug, leaving little trace of its intrinsic malevolence and preventing, by its very insipidity, a general awareness of the horrible intensity of the disease when out of control.”

“Bloody and bowed by the outrages of life, most human beings still stagger on down the road, unscathed by real depression. To discover why some people plunge into the downward spiral of depression, one must search beyond the manifest crisis—and then still fail to come up with anything beyond wise conjecture.”

“I used alcohol as the magical conduit to fantasy and euphoria, and to the enhancement of the imagination.”

“Alcohol was an invaluable senior partner of my intellect, besides being a friend whose ministrations I sought daily—sought also, I now see, as a means to calm the anxiety and incipient dread that I had hidden away for so long somewhere in the dungeons of my spirit.”

“But never let it be doubted that depression, in its extreme form, is madness.”

“The madness of depression is, generally speaking, the antithesis of violence. It is a storm indeed, but a storm of murk.”

“Over two years before my siege, an insouciant doctor had prescribed Ativan as a bedtime aid, telling me airily that I could take it as casually as aspirin. The Physicians’ Desk Reference, the pharmacological bible, reveals that the medicine I had been ingesting was (a) three times the normally prescribed strength, (b) not advisable as a medication for more than a month or so, and (c) to be used with special caution by people of my age.”

“Then, after dinner, sitting in the living room, I experienced a curious inner convulsion that I can describe only as despair beyond despair. It came out of the cold night; I did not think such anguish possible.”

“Much evidence has accumulated recently that indicts Halcion (whose chemical name is triazolam) as a causative factor in producing suicidal obsession and other aberrations of thought in susceptible individuals. Because of such reactions Halcion has been categorically banned in the Netherlands, and it should be at least more carefully monitored here.”

“While my own carelessness was at fault in ingesting such an overdose, I ascribe such carelessness to the bland assurance given me several years before, when I began to take Ativan at the behest of the breezy doctor who told me that I could, without harm, take as many of the pills as I wished.”

“More or less the same can be said for Art Therapy, which is organized infantilism.”

“It is of great importance that those who are suffering a siege, perhaps for the first time, be told—be convinced, rather—that the illness will run its course and that they will pull through.”

“A tough job, this; calling “Chin up!” from the safety of the shore to a drowning person is tantamount to insult, but it has been shown over and over again that if the encouragement is dogged enough—and the support equally committed and passionate—the endangered one can nearly always be saved.”

“To most of those who have experienced it, the horror of depression is so overwhelming as to be quite beyond expression, hence the frustrated sense of inadequacy found in the work of even the greatest artists.”

The Gentle Art of Tramping by Stephen Graham It may be approaching the centenary since its publication but this small hardback book from 1926 is a treat. One shouldn’t place aesthetics over

December 2019 reading list Here are the books I’ve got through in December 2019. There are certainly more than usual as there are several shorter volumes here. And, I had some