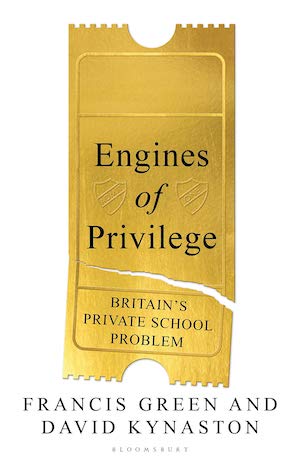 I just finished listening to the audiobook version of Engines of Privilege by Francis Green and David Kynaston.° So, first things first, I’m state school educated and I hadn’t been particularly militant about private schools. Yet looking back I can see that in the 1990s the majority of the people I knew at medical school were privately educated (though some were via bursaries and sponsorships). The 7% problem° has received coverage in recent years and I’ve become more and more gripped by the injustice and social division. How on earth can we have any positive impact on social mobility until we tackle it?

And I found myself having quite an emotional reaction to this book.

I listened to the audiobook version and it has taken me far longer than usual to get through it. I just couldn’t stick with it. Not because I wasn’t impressed or engaged, but simply because I was so utterly infuriated and maddened by the evidence and detailing of the imbalances and the privilege. I was just upset by it. There’s no doubt which side of the fence Green and Kynaston are on (both private school educated it should be noted) but it feels, at least as they present it, as a normal and rational conclusion to oppose ‘the 7% problem’ on the basis of the evidence. I had to keep stopping after 20 minutes and then having a day or two off otherwise I found myself ruminating on it all. It’s powerful, if not downright toxic, stuff.

The problem with the public discussion is that it quickly gets ugly. My reaction is typical of the responses one can expect on all sides. Anger. Indignation. Outrage. G&K call for a debate that doesn’t stigmatise parents or accuse them of hypocrisy if they do send their children to private schools. When the system is so comprehensively loaded in favour of those who receive education in the independent sector it’s just not reasonable to expect parents to ignore that when deciding for their children. I agree that we need to work hard to de-individualise this discussion and throw out the endless anecdotal, n=1, spurious arguments.

They also appreciate that many parents who send their children to independent schools often make sacrifices to afford it. The super-rich Eton, Harrow etc are the exceptions and not the private school rule. I find it quite annoying when those institutions are trotted out as exemplars of class privilege. They are freaks, complete outliers, with vast resources at their disposal. It’s the independent schools further down the scale where some reform might be feasible. And, as G&K point out, it doesn’t have to involve a wholesale bulldozing of the independent sector. There are several measures that could be considered which would help tilt the scales.

Email apps: why don’t they all have a ‘working offline’ button? This feeds into one of my golden rules for getting control of email in your life. There are several other elements I use to tame the email beast but

Howgills in November The late Alfred Wainwright° was the one that called the Howgills “sleeping elephants”. It’s a brilliant and much-used (overused?) description.