Why We Get the Wrong Politicians by Isabel Hardman 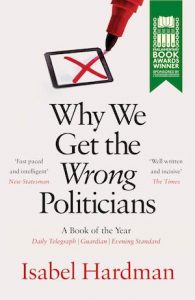 This is another book that feels like it doesn’t have a name that entirely reflects the content and is just a little too click-baity but that shouldn’t stand in the way of what is a very lively and informative read. Hardman does cover a lot of ground and it’s a largely sympathetic portrayal of our politicians. Quite rightly, it doesn’t hold back from criticising them when needed — particularly when considering sexual harassment within the establishment. Hardman has been a political journalist for many years and she is exposing the systemic problems rather than taking a tilt at the individuals.

Initially, Hardman ventures back into the shocking selection processes to which all the parties subject prospective candidates. The financial and personal costs are hugely punitive with little chance of success in even the best circumstances. These go a long way to explaining why we get the ‘wrong politicians’. They are arduous and damaging to the individuals. Inevitably, that selection pressure will have an impact on those that do make it through.

The book is also very good at pulling back the parliamentary curtain and covering the processes of the Commons and Lords for primary and secondary legislation. The functioning of the chambers along with the role of select committees are detailed and how MPs can interact with these. Hardman uses this to expose how little time MPs, our supposed legislators, get to spend doing the job one might think they are in Parliament to do: scrutinising and refining existing and new laws. Hardman makes it clear just how the system is stacked against any tendency to voice an opinion. Any attempt to do so will quickly result in career-ending confrontations with their party.

And, if you are ever thinking of standing for parliament she details the stresses, the god-awful hours and the abuse that MPs receive. It is dismal. You may have little sympathy, and goodness knows there are plenty of villains and rogues, but it serves no useful purpose to have a system that is so very dysfunctional. We have enough difficulties with disproportionate representation as it is but, as ever, it seems that money and privilege are crucial to selection and survival as an MP. I don’t know if it was Hardman’s intention but she ends up presenting a compelling case for reforms at all levels.

Orwell Long List 2019 I have, rather belatedly, given the 2020 list will likely appear next month, embarked on a small project to read, reflect, and write about all the