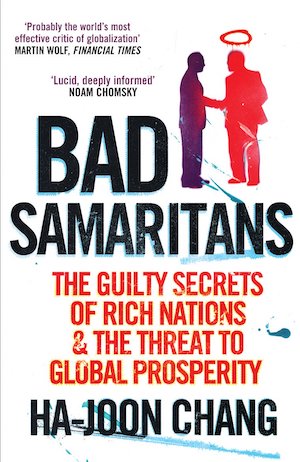 I’ve read a number of books about economics in the past year or so. They have, undeniably, been written by economists who would self-identify as left wing and who are, on various levels, putting forward arguments to refute neoliberalism.

In a recent Debrief column for the BJGP° I wrote that doctors did, often, regard themselves as being beyond politics. Economics has also tried to pull off this sleight of hand. Economic is no more apolitical than medicine. The notion that the free market is currently unrestricted in some pure form, outside the interference of politics, doesn’t stand up to any reasonable scrutiny. We don’t let industries pollute indiscriminately and we have abolished child labour — both are fundamentally political decisions, made by society, for the greater good and the boundaries of the free market are always set in one place or another.

I’ve read the Chang books slightly out of order and I’ve just read Bad Samaritans.° This one puts forward his myth-busting approach to economics, so well exemplified in 23 Things They Don’t Tell You About Capitalism° and puts it in the context of the developing nations which is Chang’s main interest. I find Chang to be lucid and compelling. We castigate developing countries who dare to suggest economic policies that we ourselves used to nurture our own infant industries°, and we strong-arm them into accepting a free market approach that will continue to enrich us more than anyone. It’s hard to shake a lurking outrage, if not shame, when our hypocrisy is so grimly exposed.

Strava update for 2019 Here, apropos of not all that much, are my Strava stats for 2019. I’m fairly diligent about recording all my activity on Strava and I find it a

On Immunity: An Innoculation by Eula Bliss This is a sensitive exploration of immunity and vaccines that occasionally digresses and certainly doesn’t follow the main thoroughfares of the