On Immunity: An Innoculation by Eula Bliss 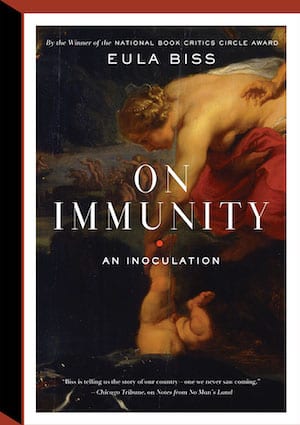 This is a sensitive exploration of immunity and vaccines that occasionally digresses and certainly doesn’t follow the main thoroughfares of the scientific highways. It’s more like a version that takes the scenic road, meandering through the countryside, ending up at the same destination, but offering a very different experience for the traveller.

Reading the reviews on Amazon is an uncomfortable experience as it serves a very pointed reminder that the anti-vax sentiment is very much alive and kicking. One review stuck with me, suggesting that Bliss didn’t quote any papers or research, though the reviewer may well have been an anti-vaxxer who simply didn’t like Bliss’ viewpoint. Actually, I think On Immunity is very rich in scientific detail, it’s just wearing it in a very different style. Bliss couldn’t have written a book° like this without the depth of research she has done, it’s a rich vein amongst many other layers, not all of them familiar to those of us whose time is spent reading a certain type of dry academic article.

Here are just a selection of passages I highlighted:

“Having virtually invented a paid profession and being almost exclusively available to the rich, doctors were suspect to the working class.”

“When he taught me [Bliss’s father] to drive, he gave me this advice from his own father: you are responsible not just for the car you are driving, but also for the car ahead of you and the car behind you. Learning to drive all three cars was daunting, and inspired an occasional paralysis that plagues driving to this day.”

“As early as 1840, I learned, a doctor observed that vaccinating only part of a population against smallpox could arrest an epidemic in full.”

“The concept of a “risk group,” Susan Sontag writes, “revives the archaic idea of a tainted community that illness has judged.””

“Killing germs, rather than washing them away, reminded him of the Crusades, when an abbot who was asked how to tell the faithful from the heretics replied, “Kill them all—God will know his own.””

“But risk perception may not be about quantifiable risk so much as it is about immeasurable fear.”

“Our fears are informed by history and economics, by social power and stigma, by myths and nightmares.”

“Intuitive toxicology is the term that Slovic uses for the way most people assess the risk of chemicals.”

“But most people prefer to think of substances as either safe or dangerous, regardless of the dose.”

“But the use of natural as a synonym for good is almost certainly a product of our profound alienation from the natural world.”

“But vaccines are of that liminal place between humans and nature—a mowed field, Berry might suggest, edged by woods. Vaccination is a kind of domestication of a wild thing, in that it involves our ability to harness a virus and break it like a horse, but its action depends on the natural response of the body to the effects of that once-wild thing.”

““Probably the worst thing that ever happened to malaria in poor nations,” Rosenberg writes, “was its eradication in rich ones.””

“It spelled “munity,” from the Latin munis for service or duty. “Munity is what you are really writing about,” a colleague would say to me.”

“The debate over vaccination tends to be described with what the philosopher of science Donna Haraway would call “troubling dualisms.” These dualisms pit science against nature, public against private, truth against imagination, self against other, thought against emotion, and man against woman.”

“That croup, the kind that was frequently fatal in a short time, was caused by diphtheria and has virtually disappeared in this country since the introduction of the diphtheria vaccine in the 1930s. My son had viral croup, once distinguished from diphtheria by the French with the term faux-croup. While diphtheria kills as many as 20 percent of the children who contract it, faux-croup is rarely fatal.”

“The wise practice of waiting and watching is hard to sell, in part because it looks a lot like doing nothing.”

“The purpose of heroic medicine was not so much to heal the patient as it was to produce some measurable, and ideally dramatic, effect for which the patient could be billed.”

“Childbed fever, as puerperal sepsis was called, was spread by doctors who did not wash their hands between exams. But doctors blamed it on tight petticoats, fretting, and bad morals.”

“Autonomy is usually imagined as the alternative to paternalism. But in what is sometimes called the “restaurant model” of medicine, the paternalism of doctors has been replaced by the consumerism of patients.”

“And the doctor, who was a father in the paternalistic model, is now a waiter.”

““Where there is trust, paternalism is unnecessary,” the philosopher Mark Sagoff writes. “Where there is no trust, it is unconscionable.” And so we are caught in a double bind.”

“measles has killed more children than any other disease in history”

“Until the results of a small study are duplicated by a larger study, they are little more than a suggestion for further research.”

“Immunity is a shared space—a garden we tend together.”

Bad Samaritans by Ha-Joon Chang I’ve read a number of books about economics in the past year or so. They have, undeniably, been written by economists who would self-identify as