Best book with an awful title 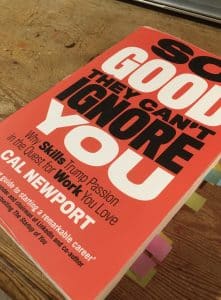 First, I should say that I like this book. I like it a lot. So much so, I’ve read it three times. And, at my age, books have to work damn hard to get a re-read.

Still, my winner for Best book with an awful title is: So Good They Can’t Ignore You by Cal Newport.°

I think the title gives entirely the wrong impression. It comes from a quote by Steve Martin, the comedian, and it is perfectly appropriate, but when it stands alone as a title I am not sure it’s hitting the spot. It just gives this rather unsatisfactory aura of self fulfilment by belief. That, somehow, if you are magical enough then you will get your reward.

It is particularly unfortunate that I get that vibe from this title because it’s almost entirely the antithesis of Newport’s book. He spends considerable time debunking the “follow your passion” approach to life and instead advocates for a much more workman-like approach. He makes the case that the passion that many people have comes from the slow accumulation of skill and experience. It grows from a deep understanding of the niche and an engagement with the subject that simply doesn’t happen without, commonly, many years of work. Yes, these people are “good”, as the title suggests, but it doesn’t even necessarily mean you will then garner some kind of externally validated success. However, it’s likely you will, either way, get personal satisfaction.

The book is aimed at those who are looking to develop a career but there is still a lot of resonance for me. Perhaps more. It’s easy in many careers to cast around looking for the next thing. It’s an easy trap for the portfolio GP. The desire to move through the jobs onto the next and ‘better’ thing is a common trait. In many industries, and academia is no exception, we’re often managed by these people. And, the overwhelming feeling is that they rarely get good at their jobs. They simply don’t stay in them long enough. Sometimes it is better to stay, keep improving, and let one’s passion grow.

Notes on a fell race: Ring of Steall 2017 Running up hills is not most people’s cup of tea. I’m not sure if I will do another fell race. The Ring of Steall Skyrace was one of the most

De-Googling I have taken another small step today towards minimising the Google effect in my life. I was an early adopter of Gmail in 2006 (back in the days