Running up hills is not most people’s cup of tea. I’m not sure if I will do another fell race. The Ring of Steall Skyrace was one of the most painful runs I have had in a long time. Memory is an unreliable indicator for this sort of pain. The temptation is to shake it off and come back next year. Not me. This one didn’t even count as Type 2 fun.° My climb up the second 1000m ascent from Glen Nevis was as humbling a physical experience as I’ve had. Writing this two years later and it still smarts.

The hills above Glen Nevis were among my very first experiences of Munros when a mate and I made a summer trip circa 1989. Actually, my very first Munro was a winter ascent, in crampons, of Sgùrr nan Gillean° on the Skye ridge but that’s a different story. I remember walking the Ring of Steall on a long glorious summer day and being thrilled with the journey and the adventure of it. The Ring of Steall does, it have to be said, lack the aesthetic qualities of a natural horseshoe walk with the start situated in Kinlochleven. A quick glance at the profile will tell you all you to know. In its 29km it packs in 2500m of climbing as, Grand Old Duke of York style, it marches you up and down again.

The race centre in the Leven Hall in Kinlochleven was well organised. We got there the night before the race at 7pm and were ushered around in 20 minutes. First, we had our kit checked. Not every single item was scrutinised but they looked at the hooded jacket, waterproof trousers, and our shoes. Tick, tick, tick. A stamp on the hand and we moved to the next table in the hall. They did a photo ID check and we were given an additional race briefing sheet and our maps. Our dibbers were strapped to our wrists. We then shuffled around and got our race numbers and a GPS tracker was taped to our race sacs. We were stood up against a wall and had our photos taken. Cue general macabre comments about body identification. Finally, we got our T shirts and I collected a little bivvy bag I had pre-ordered. That was it.

We were back the next morning for a civilised 10am start. They got us in the pen at 0945 and after 15 mins of batting off the midges we were set loose. We had 2-3km of road and track to get ourselves onto the start of the hill and the first checkpoint. Then the climbing started in earnest as we made for the first proper checkpoint (CP2) on the Steall Ridge. It was foul underfoot. Black cloying peat over waterlogged ground. I was going fine but worrying that I was going too hard. I was right to be worried. I could already feel myself getting a little rough towards the top of that first climb.

I hit CP2 and two guys were ready to ‘dib’ us in. One of them wearing a pink tutu under his waterproof. Legend. He would still be there when I came back hours later.

The wind was cutting right through us and once past the checkpoint I hastily pulled on my windproof and a pair of gloves. The Devil’s Ridge lay ahead. Unfortunately my own physical demons were lurking just behind me. The rising nausea as I hit the ridge quickly reached critical point. Had I gone too hard? Not drunk enough? I was only 1hr 10mins in, there was no way I should be having problems yet. It was almost like motion sickness, an all-consuming nausea. Looking back I now it’s easy to wonder why I didn’t shake it off, didn’t just eat, drink and get on with it. But if you’ve been laid low with proper sea sickness you will know the feeling. Utter lethargy was blanketing me. I was heavy-lidded and felt sedated. I slowed to a crawl up the hills. The weird part of the experience is that almost as soon as I was on the flat, and certainly going downhill, the worse of it faded away. I was getting passed on every hill but regaining every time we went down again.

The ridge was relatively short and we were then faced with the long descent into Glen Nevis to CP5. A drop of 1000m all laid out before us. It was magnificent but thighs were battered. 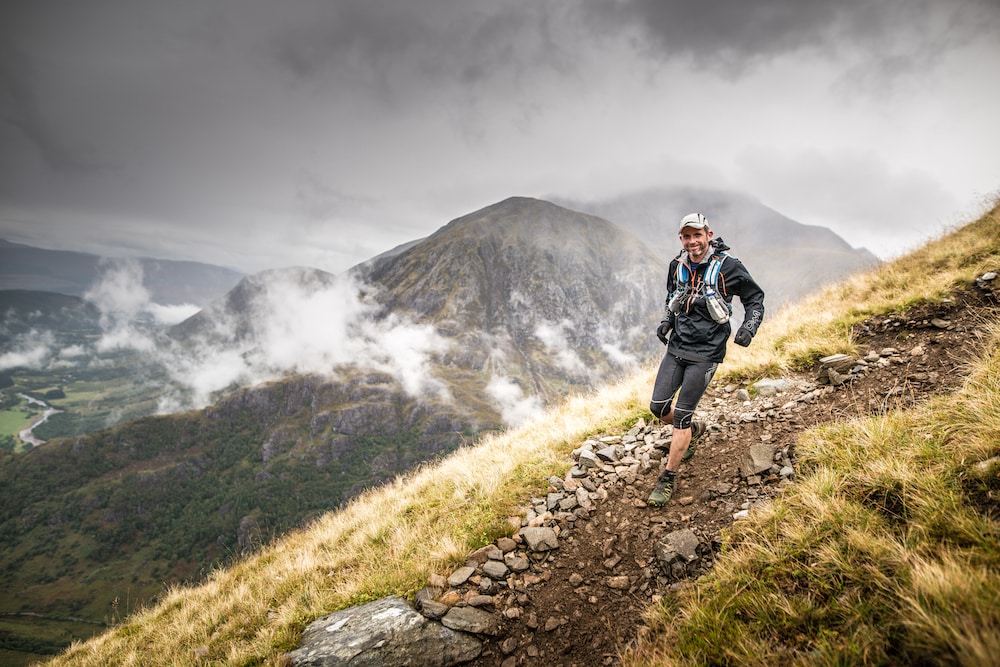 The descent into Glen Nevis

My stomach wasn’t happy at CP5 but I knew I had to eat. I got a cup of coke and had a few crisps. I also pulled out half of the honey sandwich I had made that morning. I set off from the checkpoint and slowly munched it at walking pace. Better just to keep moving. Unfortunately, the food didn’t transform me. The nausea was still there and rearing its head whenever I hit a hill. I mostly stuck to a fast walk uphill. Glen Nevis came to an end with a slithering peaty slide back down to the river. We had to wade the river. The slope back up to the top of the ridge kicked up in front of us. The climb back to the top of An Gearanach beckoned.

And so began one of the more miserable 70 minutes I have, er, enjoyed in the hills for many years. I’ve probably had worse but they were all 15-20 years ago. It was excruciating. The nausea blanketed me. Other runners, though to be fair we were all walkers now, streamed past. I lost count. Dozens of them. I wanted to tell someone. I wanted someone to see how I felt. I wanted to say that I would be fine if this sickness could just go. I simply kept going. That was the one thing I couldn’t face. Stopping. If I stopped moving then it was never going to end. If I kept putting one foot in front of the next then it had to finish at some point.

Bill Tilman memorably described this disorder as Tilman’s Foot.° The inability to put one foot in front of the other. Every step is a small victory. I was now aware that my fluid and calories intake for the run was woefully inadequate. I couldn’t even drink. If I started retching then I was certain I couldn’t take another step. I would have to retreat in ignominious shame to CP5 and abandon.

I was heading up, heading on, but it felt like the most fragile progress. A precarious progress. A false summit and I looked west to the Devils’ Ridge we had already traversed. I could see we were still well short of the same height. Spirits sunk. I could have wept. I wanted to give up. I was trapped in this earth-bound manufactured hell. More people passed.

Then, I heard the shouting. The marshall at CP7 was hollering and whooping whenever anyone crested the ridge. I stood there almost mute. I told her I was nauseated. She offered some sage advice. God knows what it was. I knew it was futile. But at least I had some flat and some downhill to ease the way.

The cold was bitter now. I wondered how aged I was as I pulled on 25-year-old dachstein mitts and several 20-somethings passed in shorts and T-shirts. The cold was grinding my bones. One young blonde girl in a startling yellow T shirt and shorts had come past me on the way up. I looked at her and wondered how she wasn’t hypothermic. I wasn’t generating any heat with my forward movement. And so it went on. There was some scrambling for interest and it was a blessed relief.

The climbs to the tops were stiff. These are separate Munros so I shouldn’t have been surprised. The last one was brutal. At this point the men and women around me had coalesced into a clot as we tried to push on. I was no longer the slowest. Everyone was fighting their own battle. I have to admit that seeing everyone else suffer gave me hope. What a bastard I am. I had felt like the only one on the earlier climb but the will to live was seeping back into me. One guy paused to stretch a cramping hip.

Then, glorious relief. The final summit of Am Bodach. Now it was all downhill. And immediately, my nausea eased and I found my rhythm. I passed people. I hailed, as a long-lost friend, the legend in the tutu marshalling at CP2 and plunged down the hillside to Kinlochleven. It was foul. Bog, bog and more bog. But, I kept passing runners. I like running downhill. The final stretches of trail were more agony but it was too near the end to hurt as much. Thankfully the road run was barely a kilometre. I jogged it in. I was feeling chipper. I was going to live through this one. I smiled at the passers-by. I willed myself to enjoy it. I crossed the line in 6hr 49 mins 48 secs.°

Best book with an awful title First, I should say that I like this book. I like it a lot. So much so, I’ve read it three times. And, at my age, books have to work damn hard to