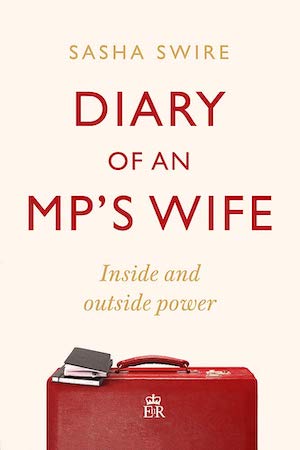 Most diarists tend to produce reams of material and much of it would be tedious beyond measure to read. In my own journal, I have written around 4000-5000 words per month since the start of 2015 which gives me around 300,000 words that I wouldn’t wish on anyone. The main function is to remind me just what the hell I was doing with myself even 12 months ago as it is getting harder and harder to hang onto the details as time as gone by. It also serves some therapeutic function where I can have a little rant or make a private bet on some future outcome.

So one of the difficulties with diaries is the level of editing. Sasha Swire makes it clear that a huge amount of material was discarded and one has to be very careful not to get pulled into assumptions based on this narrow view. It’s hard to know what level of introspection the full version of entries might demonstrate. Yet there is no question in its current format, and it is still lengthy enough, that this is a damn difficult book to like. I’m just about politically nerdy enough to get through it for its insights into the frontstabbing world of politics but I laboured through the final third, wincing.

Yet there is no question in its current format, and it is still lengthy enough, that this is a damn difficult book to like.

Swire describes herself as right of centre but, largely, the political stances are almost irrelevant. I can see topics where I might agree with her, or at least recognise and appreciate her viewpoint, and others that had me boggle-eyed. (For example, her suggestion that grammar schools should be abolished as they are divisive works for me — yet, somehow private schools are OK… Uh?) Much of the book is taken up with details of Hugh Swire’s experiences as an MP yet the author is relating these secondhand. Another layer of bias slapped on top and this dynamic feels increasingly odd as one gets through the book.

More than anything, I was left with a tremendous amount of sorrow. I am saddened that people like Swire can live lives that are so embittered; I was disappointed with the actions and gruesome machinations of politicians scrabbling for power and their measure of success; I remain appalled at the unthinking privilege and self-indulgent narcissism. It’s not all lacking insight about the privilege. Swire does acknowledge it in several places yet that doesn’t stop her carping about Hugo Swire’s then lack of a knighthood (it came of course) or, even more gratingly, the whining that Sir Hugo would never make it into cabinet due to his Etonian background. This is, again, borderline bizarre but one wonders if this was cherry-picked by the editor for effect.

Swire has some literary pretensions and some purple passages on the flora and fauna of her country home are there to sugar the unrelenting bitterness. In many ways though, these just serve to underline the privilege. The editors have been mischievous as well — one dewy-eyed elegy to the honest farmer and their disappearing way of life is immediately followed by details of Sir Hugo’s exploits blasting grouse out of the sky. The enviromental juxtaposition is stark and the rural social hierarchy rigid in Swire’s bucolic sentimentality.

I’m not sure I can recommend it; it is toxic on multiple levels and infused with a deep melancholic sadness and although there is no real mention I did start to wonder about the mental wellbeing of the author. Even the interactions with her children seem to be characterised by a bitterness about their children’s political positions. Ultimately, like many diaries, there is score-settling that would give the Starks and Lannisters cause for regret. And, there is a level of indiscretion around supposed friendships that is troubling. In the end, my overwhelming emotion from the book is sadness. Hardly a ringing endorsement.

The Calf at the Solstice

Also toxic Sunburn by James Felton is a slightly depressing read though Felton’s humour does cut through to make it tolerable. Felton doesn’t dance around and