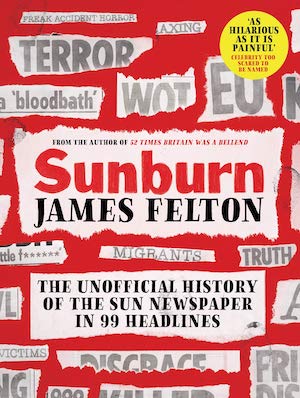 Sunburn by James Felton is a slightly depressing read though Felton’s humour does cut through to make it tolerable. Felton doesn’t dance around and there is no attempt at neutrality — he regards the Sun as a dangerous, immoral, hypocritical rag which has published, for decades, some of the most God-awful tripe. It is jingoistic, xenophobic and racist, as well as being misogynistic and… you get the picture. I’m not sure if there is a word for bigotry and prejudice related to people living in poverty but that can be added to the list.

I listened to the audiobook — narrated by Alexei Sayle. He is definitely not your typical narrator and if you are not a fan then you ain’t going to cope with it. I thought, overall, it worked out but I can see for some how it would be unlistenable. Sayle brings a certain madcap hysteria to audiobook narration that is definitely not standard but it was generally perfectly clear when he was reading headlines and quotes or offering up Felton’s gags. And I did get some laugh out loud moments from Felton.

Felton works through 99 Sun headlines and few of them will warm the heart. A large number of them may make your blood boil or at least marvel at the sheer staggering idiocy. Most of Merseyside would agree given the Sun’s shameful behaviour around Hillsborough. The utter absence of any sign of a moral compass across almost every domain is bleak. The casual sexism is grim. Of course, the Sun has little in common with many people’s view of what comprises ethical journalism. That’s one of the problems journalism faces — it is difficult to define, even harder with the advent of the internet and citizen journalism, so even the Sun hacks get swept up into the bucket.

Felton lays out the Sun’s most grievous stories in some detail and it is a sorry tale. There are many reasons for the British to reflect on the role of Rupert Murdoch in the pollution and coarsening of public life. Of course, there are complex factors in such societal changes but the Sun is Exhibit B in the case against Murdoch. The News of the World, arguably, was Exhibit A but even Murdoch saw that for himself. The day the Sun follows the News of the Screws and draws its agonal breaths will be one for celebration.

Just toxic Most diarists tend to produce reams of material and much of it would be tedious beyond measure to read. In my own journal, I have written around

June 2021 Reading List If you read just one… Some fine books here to choose from. Our Boys had been on my list for a while after it had been longlisted for the Orwell