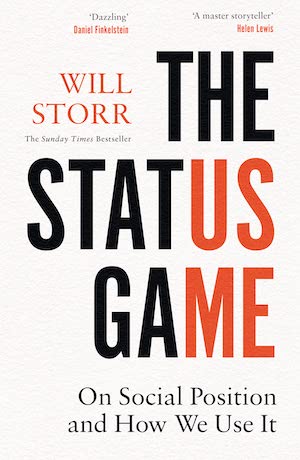 I just finished The Status Game by Will Storr this week. It’s very good, full of insight, with little in the way of regurgitation of the well-trodden scientific anecdotes that often litter such books. I recommend it highly. It will be badged as a popular science book but it can be read, in many aspects, as a rather superior ‘self-help’ book. That’s not meant to be disparaging at all and I just want to highlight how it can help us see the world and our place in it with a little more clarity.

I want to talk about footnotes.

I now read almost all my books on an ereader — I recently moved to the rather deluxe Kobo Forma. (It’s superb, thanks for asking.) Ebooks do change the dynamic around footnotes and hyperlinks and referencing. Now, there is an element of personal preference around this but it is simply done badly by many publishers. Obviously, as a journal editor I do appreciate the importance of referencing; we deal with references all the time and they are a critical element of scientific writing. There are downsides and, sadly, the reader is usually a long way down the list of priorities.

It is frustrating to read books that are so casually dismissive of the reader experience. I wrote a blogpost in November 2019 about Cormac McCarthy’s advice on scientific writing. He said:

“Avoid footnotes because they break the flow of thoughts”

Yes. This is the core problem. Most people find it hard to concentrate for longer periods these days — all the modern distractions are well known. The most wonderful facet of reading is the immersion. There is nothing better than getting drawn in by the writer, following their train of thought, being led to new insights and revelations. Cormac has this right and footnotes are devastating to that process.

Now, I enjoy a snarky footnote as much as the next person but it is the job of the writer to pick out what they want to say. And, what they don’t need to say. Footnotes are far too often a lazy excuse for not writing better prose, or a paralysing inability to kill off the clever thoughts writers (or their editors) can’t stop themselves from sharing. Putting information critical to understanding of the text into a footnote is all too often a failure to write with sufficient clarity.

That said, I appreciate many readers love footnotes and I’ve used them myself (in my last post no less). I’m not against footnotes as such, I just think they are used carelessly, and the negative impact of them isn’t always taken into consideration.

A particularly egregious habit is to mix referencing with footnotes.

Referencing is the basic technique of pointing readers to sources. It’s very important and I would be aghast not to have some option to check references where necessary — though I would argue that they can be entirely dealt with in the rear of a book without any inline markers. Footnotes are usually an embellishment. They should not be mixed with referencing. As the Ghostbusters would say: don’t cross the streams.

Mixing them is problematic as this puts the burden on the reader. This is quite subtle so bear with me while I explain my gripe. Most readers won’t feel the need to look at every reference as they read through a text. Like many people, I like having them available. When an author starts mixing referencing with footnotes then they create a problem for the reader. Is this hyperlink an interesting snippet of extra detail? Or is it just a citation, a simple reference, for another source? The only way to find out it is to click. And, the spell of the writing, the story being told, is broken and the bubble pricked. The flow is disrupted.

Even when one doesn’t click, there is an additional cognitive process that is whirring in the background that is almost impossible to turn off. Click? Or don’t click? At the same time as reading the text I have another cognitive thread running weighing up each hyperlink to make a decision about whether this one is worth the gamble. It’s tiny, but many books have at least a couple of these links on every single page.

There is evidence that the presence of hyperlinks can increase that cognitive load.

Which brings me back to Storr’s The Status Game. He does mix the streams on some occasions but it is very minor and I wouldn’t make a thing about it. Rather than superscript referencing (which is unobtrusive but in ebooks can be annoyingly hard to click with my stumpy fingers) the ebook version uses full on hyperlinks, usually over several words. They appear in a different colour and are underlined. They are incredibly invasive and I found they disrupted my reading to a significant degree. Not good at all.

Worse and rather bizarrely, the hyperlinks don’t seem to have been contextualised, often spanning weird combinations of part sentences, or stopping in the middle of names. It looks like adding the hyperlinks has been palmed off to a disgruntled intern — or, more likely, I’d wager it has been outsourced to some poor freelancer, on the cheap, who perhaps doesn’t have English as their first language.

They are a mess. And, they are a terrible eye-bleeding distraction. The publishers, William Collins, should be royally embarrassed. I thoroughly enjoyed the book yet I found it quite difficult to get through as usual. (I actually stopped for a day or two and read the short Trials of the State by Jonathan Sumption in the middle.) The book deserves better and Will Storr’s work definitely merits a little more care and attention in the ebook version.

More books to read… the Baillie Gifford Prize announces the 2021 non-fiction longlist There are two main book prizes I like to keep an eye on. One of them is the Orwell Prize for Political Fiction and the other is the Baillie Gifford

How to do footnotes Having had a moan at various points about footnotes and referencing I wanted to set out what I think is good practice, from my perspective as a