Letters to a Young Contrarian by Christopher Hitchens 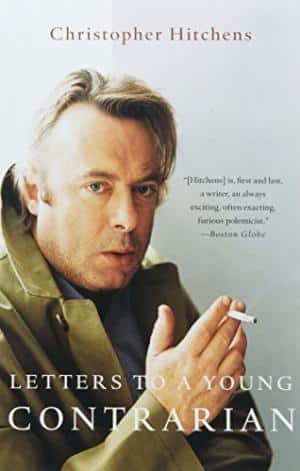 I have highlighted a remarkable number of passages in this book and it still feels like it glanced off the surface, like some wayward missile with too low a trajectory and too much speed. With Hitchens at his best they rush at you with tremendous velocity and force.

At other times, in other essays, I simply can’t parse Hitchens. I don’t have the classics background or the deep knowledge of the literature to cope. Letters to a Young Contrarian° is accessible and because of the nature of the book it is a generous seam to mine for Hitchens quotations. It’s a book, and they are increasingly rare, in my ‘read again’ pile.

Here are my selected quotes:

“There were many who retained the unfashionable hope of changing the world for the better and (which is not quite the same thing) of living a life that would be, as far as possible, self-determined.”

“The essence of the independent mind lies not in what it thinks, but in how it thinks.”

“The term “intellectual” was originally coined by those in France who believed in the guilt of Captain Alfred Dreyfus. They thought that they were defending an organic, harmonious and ordered society against nihilism, and they deployed this contemptuous word against those they regarded as the diseased, the introspective, the disloyal and the unsound.”

“It may be that you, my dear X, recognise something of yourself in these instances; a disposition to resistance, however slight, against arbitrary authority or witless mass opinion, or a thrill of recognition when you encounter some well-wrought phrase from a free intelligence.”

“To be in opposition is not to be a nihilist. And there is no decent or charted way of making a living at it. It is something you are, and not something you do.”

“You must feel not that you want to but that you have to. It’s worth emphasising, too, because there is a relationship, inexact to be sure but a relationship, between this desire or need and the ambition to rely upon internal exile, or dissent; the decision to live at a slight acute angle to society.”

“This would be idiocy in its pejorative sense; the Athenians originally employed the term more lightly, defining as idiotis any man who was blandly indifferent to public affairs.” “

“On Sigmund Freud’s memorial in Vienna appear the words: “The voice of reason is small, but very persistent.”

“George Orwell said that the prime responsibility lay in being able to tell people what they did not wish to hear.”

“Conflict may be painful, but the painless solution does not exist in any case and the pursuit of it leads to the painful outcome of mindlessness and pointlessness; the apotheosis of the ostrich.”

“Oriental religions, with their emphasis on Nirvana and fatalism, are repackaged for Westerners as therapy, and platitudes or tautologies masquerade as wisdom.”

“Pyotr Kropotkin might have been rather a rarefied anarchist but he had a point when he said that if only one man has the truth, that’s enough.”

“Our standard for these things is subject to its own Gresham’s Law:° not only does it recognise the bogus but it overlooks and excludes the genuine.”

“The fish rots from the head in such matters”

“This depressing discovery need not blind us to the true moral, which is that everybody can do something, and that the role of dissident is not, and should not be, a claim of membership in a communion of saints.”

“the human race may be inherently individualistic and even narcissistic but in the mass it is quite easy to control.”

“The socialist movement enabled universal suffrage, the imposition of limits upon exploitation, and the independence of colonial and subject populations. Where it succeeded, one can be proud of it.”

“Fatalism and piety were the least of it; this was cynicism allied to utilitarianism. Don’t let yourself forget it, but try and profit also from the hard experience of those who contested the old conditions and, in a word or phrase, don’t allow your thinking to be done for you by any party or faction, however high-minded.”

“The crucial distinction between systems, he said, was no longer ideological. The main political difference was between those who did, and those who did not, think that the citizen could—or should—be “the property of the state.””

“Populist authoritarians try to slip it past you; so do some kinds of literary critics (“our sensibilities are engaged . . .”) Always ask who this “we” is; as often as not it’s an attempt to smuggle tribalism through the customs.”

“Joseph Heller knew how the need to belong, and the need for security, can make people accept lethal and stupid conditions, and then act as if they had imposed them on themselves.”

“In some ways I feel sorry for racists and for religious fanatics, because they so much miss the point of being human, and deserve a sort of pity. But then I harden my heart, and decide to hate them all the more, because of the misery they inflict and because of the contemptible excuses they advance for doing so.”

“Irony, says Czeslaw Milosz in his poem Not This Way, is “the glory of slaves”: the sharp aside and the witty nuance are the consolation of the losers and are the one thing that pomp and power can do nothing about.”

“There are times when one wants to hold society’s feet to the fire, and to force a confrontation, and to avoid the blandishments of those who always call upon everyone to “lighten up” and change the subject.”

“Dante was a sectarian and a mystic but he was right to reserve one of the fieriest corners of his inferno for those who, in a time of moral crisis, try to stay neutral.”

“However, you should get and read Joe Sacco’s cartoon-history Safe Area Goražde°, to which I was honored to contribute an introduction.”

“Never be a spectator of unfairness or stupidity.”

“Seek out argument and disputation for their own sake; the grave will supply plenty of time for silence.”

“Suspect your own motives, and all excuses. Do not live for others any more than you would expect others to live for you.”