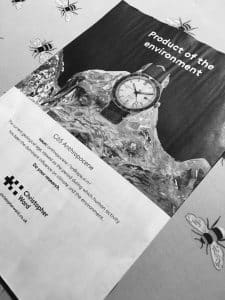 The advert on the back of Private Eye this week features a watch from the company, Christopher Ward. The watch is the C65 Anthropocene and it comes in at £995 in its cheapest version.° Apparently: “Inspired by the Scottish Opera’s ‘Anthropocene’, this 300-piece limited edition integrates the production’s icy wilderness setting into its very design.” Well, let me speak plainly: what a load of absolute bollocks. For a start, and this is mostly an aside, this is the kind of pretentious imagery that makes me want to gouge out my own eyes.

But it’s worse than fluffy PR hype. Let’s be clear, high-end luxury watches are about blatant consumption and excess. Ironically, Christopher Ward’s thrust is that they are, in fact, affordable when compared with the ultra-oligarchal end of the market. It’s a marker of how far we’ve distorted consumption when spending £1000 on a watch is positioned as reasonable. The main headline for the advert is Product of the environment. Yes, like everything is of course, and that’s rather the point isn’t it? We wouldn’t be in the Anthropocene if we hadn’t pursued our boundless ambition to produce from the natural resources we have at our disposal.

Apparently 5% of the price will go to conservation charities and this virtue-signalling is currently commonplace in the premium watch market.° We should call it out for what it is: cynical marketing that flags the rank hypocrisy of manufacturers. I don’t qualify as an environmentalist, I understand that there are many changes I still need to make to my life to help with sustainability, and doubtless there are many luxury goods I have that I could forego. However, I’m still sufficiently grounded in reality to recognise that conflating expensive watches with environmentalism is vomit-inducing fakery and naked deceit.

More on email - geeking out with MailMate One of my basic beliefs about email is that the key to success is to be online for the minimum possible time. You treat it the same as a physical