More on email - geeking out with MailMate 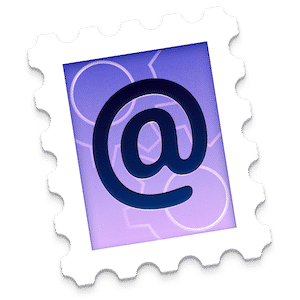 One of my basic beliefs about email is that the key to success is to be online for the minimum possible time. You treat it the same as a physical mailbox. You wouldn’t stand beside your letterbox doing the work that was received in the letters. You have to treat it as a collection point. Get in, get out. Do the work. Go back later. Preferably just once or twice a day. You are still communicating fast compared to the old snail mail but you can achieve some balance with competing demands on your time.

The most heinous email crime one can commit is to work out of one’s inbox when it’s still hitched to the open streams of the internet. This approach drives my views on the apps I use to manage my email. The ability to work offline is essential and makes browser-based email a bit of a loser. It was just three weeks ago when I was bemoaning° this missing feature and I’ve just discovered a rather wonderful email app for Mac, MailMate.° It also has a lightning fast structure and even allowing for some initial set up it is going to save me a lot of time.

Just to reiterate: you can’t take care of the work that comes into your inbox if you are forever pausing to look at the next email as it pings. As well as the evidence around the cognitive impact, it’s a psychological torture device. A bit like working in certain branches of medicine, say emergency medicine, where the work never stops flowing in. You never get to the end of the work, the doors never close, but at least you do get to the end of your shift. With email people don’t even have a virtual clocking off time. They just plough on, wondering why they are so stressed.

Back to MailMate. It has a spartan appearance and you have to write your replies in plain text and Markdown - though the app handles HTML incredibly well and styles the outgoing emails as needed. I realise this will scare some people off but it is straightforward. The developer also makes a compelling case.° And, really, how many emails do you send with anything more than very occasional smear of italics or bold? MailMate does only work for IMAP so if you are locked into the Microsoft Exchange structure then it won’t help. My university email sits within that dreary walled garden but I do have other accounts where I have some more freedom. 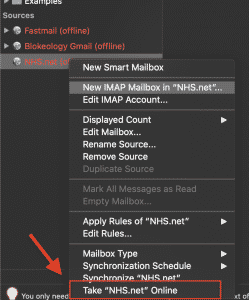 MailMate allows you to toggle individual accounts and I have also discovered, and this is wonderfully helpful, that when the email account is offline, you can still send email. MailMate doesn’t block access to the SMTP server and you can still send out. This is completely fantastic. It’s always been a problem that when you collect the email you have to turn it back on again to send - more emails trickle in and, inevitably, you are back on the email dreadmill. I’ve tried to hack all kinds of solutions for this and MailMate just bakes it in.

I made a couple of tweaks to how it works for me. There are good instructions at the site but there’s a potted summary in the next two sub-headings.

Turn on your app in an offline state

If you turn Outlook to offline and close it then it will, when re-opened, still be offline. No problem there. It does mean you have to remember to do it each time - and I have conditioned myself to make it a habit. MailMate also allows you to tweak the preferences to ensure it always starts offline. I highly recommend this. If you have to grab a file or check the wording of an email for another piece of work you don’t get subjected to your inbox again if you left the app with it still online. It does involve a little bit of work in MailMate and you’ll have to go into the Terminal but it’s simply a matter of cutting and pasting a single line of code to change the default. Restart MailMate once you’ve done it. Easy. Here’s the code to type into the Terminal:

This is the keybindings functionality that MailMate makes it easy to access. Go to the MailMate app in the Finder and right click. Open Package Contents. Then go to Contents/Resources/KeyBindings. I duplicated the Gmail plist file and called it Gmailextra. I then added this line of code under the ‘Only in MailMate’ section of the file: 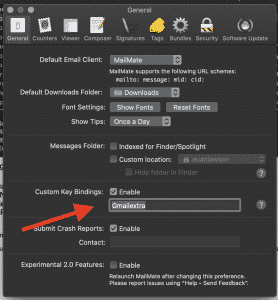 That now means that Option-Command-o will toggle the online state of all the accounts. Then, you simply type Gmailextra into the Preferences panel in the app:

And, that’s it. The app is now automatically offline when you open it. You can use Option-Command-o to turn everything off and as soon as you have them downloaded then flip to offline again with the same keyboard shortcut. Rinse and repeat.

06 Dec 2019 EDIT: I just updated my MailMate to the new version. The plist file with my Gmailextra settings disappeared in the update so my keyboard shortcut to toggle all accounts on/off was broken. I added it again, as per my own instructions, and all is well.