London Review of Books: How to Buy Drugs by Misha Glenny and Callum Lang 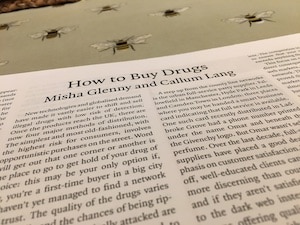 I read Misha Glenny’s book Dark Market a good few years ago and it was a fascinating exploration of the dark web. The London Review of Books article in the title,is available online° at the moment but I have, thanks to a kind friend, a gift subscription to the LRB so I read it on old-fashioned paper.

The substance misuse clinics where I work in Blackpool are mostly filled with people with problems with heroin and crack cocaine. Alcohol, of course, and there are frequent problems with benzos, sometimes Spice, and the occasional amphetamines. Standard stuff. Party drugs don’t feature all that much although I don’t doubt our clients will have dabbled with them over the years. I also think that supply of drugs like heroin and crack is still relatively old-school - it’s hand-to-hand street (or near street) deals in the way it has been done for years. As Glenny and Lang suggest, this is the riskiest, with a worrying risk of getting caught or brutalised or simply ripped off.

Glenny and Lang go on to discuss the ‘county lines’ model and also the “urban full-service party supplier” with its emphasis on reliable courteous service and customer satisfaction. The fourth service and the main thrust of the article is the dark web. There’s an interesting angle that results in a kind of self-policing of quality - the admins of one site buy products themselves and get them tested. Clearly it is done for self-serving reasons but contaminated drugs or ones with highly variable purity can kill. The customers benefit.

One wonders where the drug trade on the dark web will lead. Apparently some 29% of illegal drugs are now bought online (though there is no reference for this and the way it is written in the article is a little ambiguous). It is almost impossible for law enforcement to shut it down permanently at present. That said, Glenny and Lang describe an elegant, and slightly convoluted, takedown used by law enforcement recently. Another will pop up soon. I wonder how much this kind of access to illicit drugs will increasingly normalise their use - it’s hard to predict but the relatively safe (safer anyway) access to drugs, where there is a reasonable expectation of quality, moves use into a much wider section of the population. That will ripple out through society in the years to come.

Monthly reflection on activity: October 2019 I do record most of my exercise activities on Strava°. It does make a difference to the amount of training I get done. I record my runs and cycles