Smith: Why are doctors so unhappy? 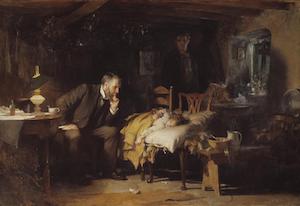 I only recently read this short editorial° from the former editor of the BMJ, Richard Smith. It was published in 2001 article and it has over 100 citations - which is remarkable and testament to how much it has resonated, and continues to resonate, with doctors. I think this may be the first time he refers to the ‘bogus contract’ and it is one that is memorable and easily recognisable to all doctors (and probably plenty of patients as well).

There is a mawkish sentimentality that many doctors cling onto - the classic painting by Luke Fildes is one that doctors get dewy-eyed over. Here is Smith’s pointed comment on that:

Luke Filde’s 19th century painting of a contemplative doctor alone with a sick child might now be replaced by a harassed doctor trying to park his car to get to a meeting on time.

Ouch. It is devastatingly accurate. He goes on to highlight that “curing a sick child” is a very different form of gratification to that which comes with attending a meeting and agreeing to take an “abused child into care”. I don’t think that’s entirely fair here as there was precious little curing going on by Filde’s doctor but it is certainly true that’s the romantic notion of it. The reality of modern medicine doesn’t come within a country mile of that idealised version.