Some quotes from Seneca: On The Shortness of Life 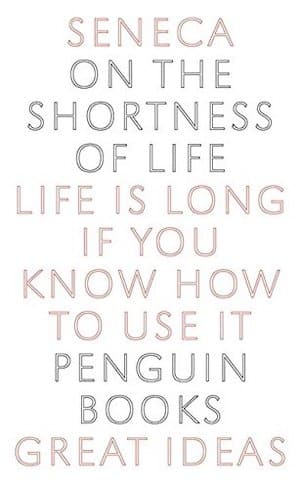 The Great Idea series° from Penguin are lovely little books. They tuck under the elastic of my Leuchtturm1917 notebooks° and can go anywhere. There is, of course, little shortage of quotes from Seneca and some of these are very well known.

Here are a few that struck me. The first is well known.

“It is not that we have a short time to live, but that we waste a lot of it.”

I had not come across the next one before but it struck a note. Always casting around for new things is, in Seneca’s opinion, just as senseless as non-engagement. Sometimes we have to just be satisfied with what we have and work at that.

“They are in the same category, both those who are afflicted with fickleness, boredom, and a ceaseless change of purpose, and who always yearn for what they have left behind, and those who just yawn from apathy.”

Seneca had this to say on the past. He was a fan:

“It cannot be disturbed or snatched from us; it is an untroubled, everlasting possession.”

Of course, Seneca wasn’t quite so genned up on the modern nature of memory but it’s can be a comforting thought. Not everyone has fond recollections and it doesn’t account for those with traumas that blacken their lives.

“But life is very short and anxious for those who forget the past, neglect the present, and fear the future.”

“We must go for walks out of doors, so that the mind can be strengthened and invigorated by a clear sky and plenty of fresh air.”

Not much changed there in the past two thousand years. If ever there was a need for more walks it is now.

Aporkalypse Now African swine fever (ASF) is cutting a swathe through the pig population. Who knew? There is a World Organisation for Animal Health°, which I will