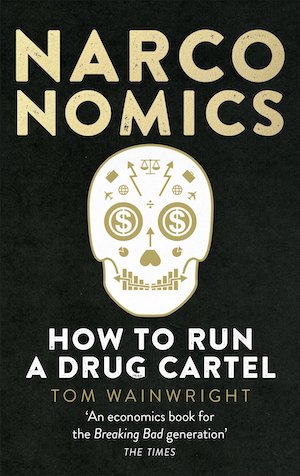 Narconomics has been on my reading list for a long time now and I’m sorry I didn’t get to it sooner. It’s a sharp analysis, informed and informative, and I took a tremendous amount away from it. It reinforced some important points around the global drug market. Wainwright covers in some detail° the expense and largely futile policing of the drugs trade. In an early example, he takes us through the economics of destroying large amounts of the coca crop and how this has almost no impact on the final price for the consumer. Until then the policy of destroying the source of the drug seems to be entirely logical yet Wainwright dismantles it so comprehensively you are left wondering how you ever believed it in the first place.

The concept of the hard drugs market as being relatively inelastic is an important one. Reductions in supply don’t necessarily shift demand. Attacking the supply-side of the industry has very little impact, particularly in early links of the chain. Interestingly, one of the biggest changes in heroin use, in one case study, was the large-scale adoption of heroin assisted treatment in Switzerland. In effect, it reduced the market, but it also took out the low-level dealers with dramatic reductions in overall usage.

It is also worth reiterating an important point about the drugs debate. It is important to acknowledge the difference between decriminalisation and legalisation. The countries where drugs are used (UK, USA etc) are keen to lay the blame for the problem on the supply side with Johnny Foreigner. We need to be mindful that a half-baked decriminalisation could result in unintended consequences. It will not necessarily have the same effect as full legalisation and regulation. The murders, the deaths, and all the misery inflicted through the organised crime networks that supply the drugs may continue depending on the exact nature of the changes. Decriminalisation may work for the drug-consuming rich nations while entrenching violence and poverty in the drug producing and transit countries.

The move towards cannabis legalisation continues. Wainwright also explores this using economic principles and the often complex, not always intuitive, impact it can have on drug markets. There is a fascinating opportunity with legal cannabis production to ensure it is socially just. Handing over the industry and the profits to corporate regimes would be a mistake - try this article in The Correspondent° for more on empowering people through Big Marijuana.

January 2020 reading list Nothing too complicated about this. Here are the books I’ve got through in January 2020. As usual there is a mix of audiobooks, ebooks, and good old