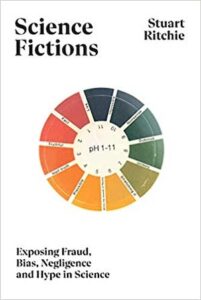 Here is my reading list for October 2020 and I hope it highlights some books you may be tempted to try for yourself. There is no ranking here and they are simply presented in the order in which I read them.

For anyone who spends any time thinking about evidence to help with decisions (and you should) then Science Fictions by Stuart Ritchie is the obvious choice this month. Just because there are flaws in the way evidence is presented doesn’t render it all useless—but it is more important than ever to be able to make those judgements.

I found this a slightly disjointed book, not entirely focused, and I’m not sure I was that keen on Foer’s style in certain sections. It is undeniably compelling. I found the argument that Foer put forward irresistible. This is partly as Foer doesn’t try too hard to persuade us—a good technique for doing exactly that but I didn’t feel I was being played. Will it stop you eating meat? Quite possibly. If you are mostly plant-based and wobbling then this book may well tilt you over the edge.

On Fire by Naomi Klein

This is a collection of essays and other writing from Klein, the Canadian author and social activist, including speeches to various organisations. There is a little repetition but mostly I found that they hang together beautifully. She is writing from a left wing liberal viewpoint but Klein’s recent efforts have been to put those politics in the context of the climate emergency. I find it difficult to listen to her and be anything other than utterly persuaded.

This could be regarded as a disheartening book but I prefer that we make some clear-headed appraisals of the evidence with which we are presented. It is a tremendous introduction to meta-science, the science of science. This is not quite as navel-gazing as it sounds. As Ritchie puts it:

“If science is the process of exposing and eliminating errors, meta-science represents that process aimed inwards.”

Publication bias, p-hacking, data dredging are all here. Not to mention outright fraud and overblown hype. If we don’t minimise and eliminate these we’re never going to come to the right decisions as our science will be tainted.

Against the Grain by James C. Scott

Scott explores the earliest civilisations and I’m a bit of a sucker for these pre-historic excursions but I was a little disappointed. There are some interesting notions—for example, the mutual inter-dependence between barbarians and those dwelling in the walled cities and the role of slave trades. There are also the well known problems of disease in these societies, unknowable for those at the time, in moving from hunter gatherer to city lifestyles. Yet, I found the book hard work and it just never grabbed me.

The Most Good You Can Do by Peter Singer

I’m trying to remember how I got put onto Singer. I think it was Jonathan Safran Foer as Singer leapt into prominence for his 1970s book, Animal Liberation. He is a philosopher and not afraid to ask some hard questions. You will think differently about charitable giving, indeed how you live your life, after reading this book. I’ve long felt a resentment at the emotional heart-string tugging that goes into your typical appeal from charities. Singer offers an alternative: effective altruism. There is a TED video (natch) if you can’t find the time for this book.

Left Out by Gabriel Pogrund and Patrick Maguire

Corbyn does not come out well of this telling of the recent Labour psychodrama. But few do here. My overall sense was of a lot of people behaving abysmally. It’s difficult to avert one’s eyes and stop reading, but it’s the same uncomfortable sensation one gets witnessing a car crash. Pogrund and Maguire dwell on the Corbynmania but all too often he appears passive, utterly unsuited to the demands of leadership. It also offers plenty of insight into the ongoing anti-semitic debacle with Jezza. All the indications suggest he is an honourable man who has devoted his life to many worthy causes. His very sense of self revolves around this anti-racist self perception. This is the trap; he seems unable to fathom how he could be considered anti-semitic and Labour find themselves trapped in a doom-loop.

I read Banks’ contemporary fiction back in the 1990s and I got up to A Song of Stone (1997) before tailing off. One has to be a little careful about memory but I have a vivid recollection of going through several of them while ensconced in various Kathmandu cafés in 1996 while on my medical elective. (Spent at a small cancer hospital in Bhaktapur.) I’m not sure why I never took to his science fiction but I had a sudden desire to take on this first book in the Culture series. And it is a towering achievement, a fitting memorial, one of many he has left us, to a man who died too early at the age of 59.

How Fascism Works by Jason Stanley

A short book but one that deserves to be kept near at hand for reference as various malignant political forces try to bend society to their will. This is no historical tome, though it references past processes with inevitable reference to the Nazis. I read this just before the vote but now we are through the US Presidential election and reflecting on the Trump administration, among others around the world, it’s easy to pick out the scenarios being played out before our eyes. There is an argument that it will add more to polarisation but I found it sufficiently nuanced to reach beyond that.

September 2020 reading list As it happened I got through just eight books this month though one at least was something of a beast. However, given I took on the editorship of

Back on Twitter It is has taken me a while but I have rejoined Twitter. It is a somewhat painful process after deleting it all a couple of years ago. I was first on