Wake Up by Piers Morgan 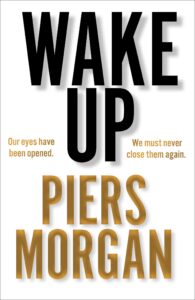 Now it is no great shakes to declare that 2020 has been full of surprises, few of them in truth that pleasant. If there was one person I didn’t think would feature in my writing around medicine and politics and books it was Piers Morgan. Like many, though by no means all, I’ve been a long subscriber to what could be called the Hislop School of Thought. The Private Eye editor and HIGNFY panellist has a particular enmity for Piers Morgan and, frankly, it didn’t seem that unreasonable. That said, I’ve always been wary about ‘hating’ celebrities, or politicians for that matter, as we never know these people, not truly.

Piers Morgan has come over as a raging egotist, a Trump apologist, and shameless self-promoting narcissist. Yet, looking back there have been clues. There’s the Youtube video of him in the cricket nets gamely being peppered by Brett Lee’s fast bowling. He took it, cracked rib and all, with impressive courage. Chapeau. I also read Emily Maitlis’ book Airhead earlier in the year and Piers Morgan appears in there, a friend of Maitlis, and the portrayal hints at the decency of the man. I seem to recall, though don’t quote me, that she also mentions Morgan’s assertion that he regards himself as a feminist. He was also the editor of the Daily Mirror. Now, like any tabloid, particularly in that era, it was hardly a bastion of moral rectitude. But, there was the matter of the vociferous opposition to the Iraq War from Morgan and colleagues, a good moment for him and the Mirror.

Anyhoo, back to the politics and medicine. Perhaps then it shouldn’t come as quite such as surprise that he has been the surprise hero of the COVID-19 pandemic. He has, with considerable gusto, thrown himself into holding the British Government to account. To be fair, given the vacillation, the u-turns, and the sheer agonising ineptitude this should be more in line with shooting fish in a barrel. Yet, it has been largely beyond the media. Not so Piers.

He describes himself as a liberal and the book is an extended rant against “illiberal wokery”. Now, I don’t agree with him about several arguments within the book and it is all too easy to hear Morgan ranting in sections. He does have a very valid and real point about cancellation culture. It’s difficult to reconcile free speech with the no-platforming approach. For some of the most despicable hate speech mongerers there will be legal grounds for this but one feels it should be held in reserve and deployed in only the most egregious of cases.

And, he is on the side of the angels, well Obama, here as well. Personally I’m less certain this is about wokery, as he characterises it, and more about polarisation. Morgan’s ‘wokery’ is just one manifestation of the divisive nature of social discourse. In some ways Morgan is resisting the polarisation, not letting himself get dragged to either extreme. It is an impressive example of self-confidence, possibly mildly pathological, and those torrid forces tugging at his ego have resulted in him coming across as vaguely unhinged as he has raved about men wearing papooses or vegan sausage rolls.

I took a bit of a deep breath before reading this book, thinking it might be one to puncture my filter bubble. In the end, not so much. I was worried it would provoke some visceral reaction, deepening my own bias. It has, in many ways, given me a tremendous amount of pleasure. It’s all too easy to read books that simply confirm one’s bias. It turns out I almost certainly have more in common with Morgan than we are apart. Arguably, Morgan is now an unusual beast, someone who has not gravitated to an extreme pole, holding liberal views from decades past, but not letting himself be pulled further. The political tectonic plates are shifting but I suspect Morgan has barely budged an inch even as the ground under him has been rent. He has, in 2020, found his mojo again and, to borrow a slightly grim phrase, he is having a ‘good’ pandemic. Which is good for him. And as it turns out it’s pretty good for us too.

Morgan ranting about it is just intolerant and it’s even vaguely bullying; a quality that is often not too far away with our Piers.

Let me finish on a sidenote and say a few words about vegan sausage rolls to hark back to Morgan’s days of petty irrelevance. I don’t actually know what Morgan’s beef is with them but I suspect the problem is the lack of the ‘beef’, well pork. Often it is when plant-based food tries to imitate meat products that it often goes wrong. The thing is, many of us have grown up with sausage rolls, they are a comfort food. Yes, I could eat something completely different but that roll of pastry with a salty tasty smear running down the middle is good. For me, it is just as good, in fact even better, than the meat version. I get the same fatty salty flaky warmth and comfort without the dead animals. Win-win.

Morgan ranting about it is just intolerant and it’s even vaguely bullying; a quality that is often not too far away with our Piers. He does, to his credit, acknowledge this in a few places in the book. I’m not sure his day-to-day behaviour has improved with this self-awareness and insight. I still see him regularly calling out some muppet on Twitter by citing his own follower count. Morgan might be putting in an unexpected bid for national treasure status but the planet-sized ego is still capable of eclipsing and undermining his own arguments. The book is well worth the read though.

Back on Twitter It is has taken me a while but I have rejoined Twitter. It is a somewhat painful process after deleting it all a couple of years ago. I was first on

November 2020 Reading List One to read: Brian Deer could be the dictionary definition of tenacious, if not obsessive. The Doctor Who Fooled the World is superb. Wake Up by