Talking to My Daughter About the Economy by Yanis Varoufakis 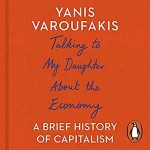 I finished off this wonderful little audiobook this weekend. My vague sense of Varoufakis was that he was a disruptive, if not obstructive, rebel influence when Greece went through their agonising economics ruptures a few years ago. I’ve nothing concrete to base this on but it’s the impression, the ghost of an opinion, that lingers in my memory. Now, I look back and wonder how much of that has been driven by the media’s pen strokes, the picture they drew, and the prevailing blame climate that was foisted onto Greece. I feel some irritation as I suspect I’ve been duped. Perhaps not, but I certainly recognise that I’ve only had one side of the tale. 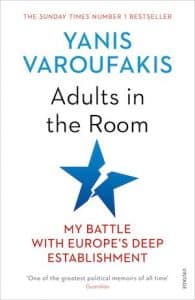 The premise of this book is that Varoufakis is giving an overview and brief history of capitalism and economics to his daughter. It works. It’s a neat mechanism to put the philosophies and contradictions in context. There is plenty of politics here as well and Varoufakis is quite plain speaking about his own opinions. I’m not far off them. More than anything, it makes me think that my view of the man was truly driven by the media and that annoys the hell out of me. One can only maintain sceptical thoughts about so many subjects at once - what can we trust in the newspapers and on the television? Is it all completely tainted? It’s a frightening thought. I am going to try to remedy my understanding around Greece - starting with other, longer and more detailed, books by Varoufakis and others about the crisis, starting with Adults in the Room.°

Howgills in November The late Alfred Wainwright° was the one that called the Howgills “sleeping elephants”. It’s a brilliant and much-used (overused?) description.

The November 2019 Debrief My monthly Debrief was published in the new November 2019 issue° of the BJGP last week. This time the title was Bounded rationality for generalists.