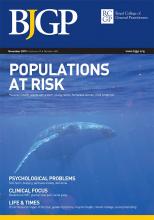 My monthly Debrief was published in the new November 2019 issue° of the BJGP last week. This time the title was Bounded rationality for generalists. Inevitably, in writing a 600-700 word article a lot of stuff has to be dropped out or skimmed over. This month the article covers some thoughts around the work of Herbert Simon, bounded rationality, and the paradox of choice. It is an expression of alarm at the endless choices and decisions we are forced to make. I tentatively suggest it threatens the very viability of the medical profession.

I look on with some horror at the relentless production of evidence which often feels far beyond the ken of any one person. Often my thoughts are simply: Stop the world! I want to get off. Yet, I also recognise that the niches within which we work have gaps but my overriding emotion is one of anxiety. We have more evidence than we can use in a lifetime yet we’ve precious little time to reflect on it. What is this life, if full of care, We have no time to stand and stare? It’s the first line of the poem Leisure by WH Davies°. It is most assuredly not musing on the challenges of research implementation but it wouldn’t be a bad approach to take.

While I’m on the poetry kick, there is a touch of the Ozymandias° to evidence-based medicine. Look on my Works, ye Mighty, and despair! Who would dare speak against the edifice? Sometimes, it is a tyrant, one that towers over us and proclaims its own wonder, its very vastness unknowable, arrogant in its greatness. I don’t think the same fate as Ozymandias awaits but there’s a lurking hubris and a need to accommodate the stony realities of human nature.

Talking to My Daughter About the Economy by Yanis Varoufakis I finished off this wonderful little audiobook this weekend. My vague sense of Varoufakis was that he was a disruptive, if not obstructive, rebel

Blackpool is still dancing This is the week that Strictly Come Dancing bigs up Blackpool. They all build up Blackpool and the Tower Ballroom and there is tremendous