The Growth Delusion by David Pilling 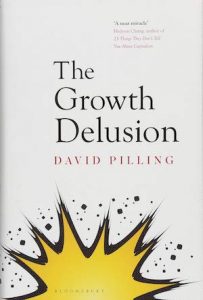 This book is about GDP. Gross Domestic Product. It might not seem like the most auspicious of topics but Pilling pulls us along into a fascinating journey through economics, climate change, and happiness. GDP is a single number that has come to dominate our lives in a staggering way. It is the embodiment of the ‘economy’. Whatever that is. Pilling explores this and, near the end, describes this single number as “trying to squeeze a frog into a matchbox”. He reminds us that the economy is just an invention, it isn’t real in the sense of being tangible. It’s a relatively modern way of conceptualising some of the activities of our society.

He discusses alternatives to the GDP like the Genuine Progress Index° and the Happy Planet Index° (not widely used, he tells us, due to tendency for it to make world leaders laugh). He considers the environmental impacts of growth and how we might take them into account. He describes how two separate processes came up with the same number for the overall wealth of the world, somewhat spookily as he says, with the value of $33 trillion. He asks: should we be describing the planet’s resources in money terms at all, does it legitimise the destruction of deep time resources?

He gets into happiness and, so inevitably, discusses Bhutan and its Buddhist influenced approach. Parenthetically, they still don’t seem that happy on most measures but that might be because they are just so darn poor they still have to raise themselves up to that basic level.

There is one rather wonderful quote about growth: “Only in economics is endless growth seen as a good thing. In biology it is known as cancer.” This can stand along Greta Thunberg’s angry: “fairy tales of eternal growth” rebuke° to those that can’t spot the internal flaw of growth-orientated capitalism.

Pilling talks about the “deaths of despair” and I’m very aware of how much I see those in my routine clinical work — the deaths due to suicide, drug addiction, and chronic liver disease. It was economists Anne Case and Angus Deaton who first talked about this and I’ve ordered their new book, Deaths of Despair and the Future of Capitalism° that has only just been published. What strikes me is that this concept has, potentially, enormous power to change how people view these problems and might influence how we tackle them.

March 2020 reading list Better late that never, here’s the March reading list. Just in time for the end of April. It all coincided with full COVID-19 busy-ness so has had