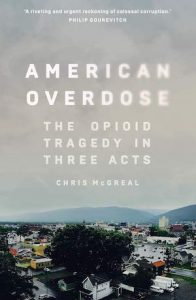 For me, there wasn’t any getting over the sheer of horror of this book. It unflinchingly portrays the drug industry in all its absolute criminal neglect. Looming large is Purdue Pharma who built their business up from the humble origins with the Sackler brothers into a billion-dollar corporation. They shamelessly manipulated the research, the researchers, the clinicians, and federal agencies who should know better. Oxycodone was a drug that simply didn’t have good evidence but they managed to create a movement, the ‘epidemic of pain’, that compelled doctors to prescribe. The pill mills in counties like West Virginia churned out prescriptions at an alarming rate. Far faster than any single doctor could even write them.

Eventually, many of those doctors and others who organised those clinics faced some kind of retribution but often it was minor, few did any jail time, and they all ended up significantly enriched. None more so than Purdue Pharma but many other pharmaceutical industries were quick to jump on the bandwagon. Their influence went far and wide and deep. Apparently independent institutions were taking hefty payments from the industry. And Americans died in their hundreds and thousands.

This particular sordid story has a long tail as well. Even if the prescription opiates have eased back many people have already been led into opiate addiction and this is fuelling increases in heroin use. It will be another generation before this is back to any kind of balance and in the meantime people die, families are bereaved, children are taken into care, societies are irrevocably disrupted. I’m very involved in the clinical management of substance misuse and we’re all deeply concerned about the death rates from drug poisoning in the UK yet we barely register as a tremor compared with the seismic disruption from opioids in the USA.

There is much to raise alarm: the misrepresentation of the NEJM letter by Porter and Jick that was misrepresented, cited for years, to make the case and drive for opioid prescribing; the lobbying and pernicious influence of the pharmaceutical industry on governments; the complicity of state organisations with corporate entities and the revolving door as regulators took up lucrative consultancy posts; the manipulation of drug trials and “enriched enrolment”; and the scumbag doctors who flagrantly breached professional values to amass fortunes. When it comes to anger, it’s difficult to know where to start.

“The crude calculation is that prescription painkillers have claimed more than a quarter of a million American lives, although there are good reasons to believe the toll is higher because of under-reporting and stigma.”

“The US consumes more than 80 percent of the world’s opioid painkillers yet accounts for less than 5 percent of its population.”

“The congressman had other examples: a Kentucky doctor who prescribed more than 2 million pills to 4,000 patients over 101 days, and the physician who saw 133 patients in a day in an office without electricity and was prescribing OxyContin and Viagra to teenage boys until the feds locked him up for twenty years.”

“The FDA continued to allow OxyContin to be widely prescribed for moderate pain. “We were ignored,” Congressman Rogers told me. “They just listened to us, smiled, waved good-bye.””

“The White House estimates the crisis has cost the United States $1 trillion because of the demands on health care, policing, the courts, and lost jobs and productivity and is likely to cost half that amount again over the next few years. The epidemic costs West Virginia alone more than $8 billion a year, about the same as the drug industry makes from opioids.”

“In 2017 the New England Journal of Medicine posted a rare warning note over the online version of the Porter and Jick letter whose misrepresentation had been a foundation of the campaign by the opioid ideologues: “For reasons of public health, readers should be aware that this letter has been ‘heavily and uncritically cited’ as evidence that addiction is rare with opioid therapy.””

“But they were drowned out as the American medical system was hijacked by a mix of bad science and corporate money. The result was a lost decade—the years between the unequivocal warnings from those grappling with the early impact of mass prescribing of opioids and the CDC stepping up to the plate—in which the epidemic could have been contained and hundreds of thousands of lives saved.”

The Growth Delusion by David Pilling This book is about GDP. Gross Domestic Product. It might not seem like the most auspicious of topics but Pilling pulls us along into a fascinating