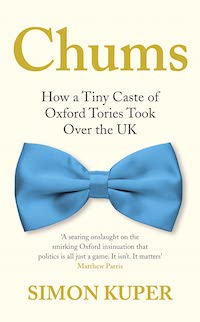 I enjoyed Chums by Simon Kuper and it is certainly a book for modern political times. (Though it would be relevant at any point in recent years/decades.) The Matthew Parris quote on the cover sums it up nicely:

“A searing onslaught on the smirking Oxford intimation that politics is all just a game. It isn’t. It matters.”

It is a brutal takedown and a damning indictment. Kuper doesn’t generally offer much hope of future change - he seems resigned, though not hopelessly, to the likelihood that the status quo will be maintained.

It’s easy to read this as a takedown of Johnson, Cameron, Gove et al. And, Kuper certainly manages to eviscerate them. It’s not pretty. More importantly, Kuper’s book is just one aspect of a wider discussion around inequalities. It is eye-opening when you breakdown the impact of Oxford and just how much it has facilitated a ruling class to grasp the reins of power. Kuper’s thesis here is that it is profound. Perhaps that won’t be maintained and this is a blip but Kuper’s book presents evidence that it is simply the way things have been done for a century at least. It is the norm.

…Kuper’s book is just one aspect of a wider discussion around inequalities.

And, although there is not much space devoted to it, a sliver of optimism is offered at the end that it could be done very differently at institutions like Oxford. (I say “like Oxford” but really Oxford is almost in a class of its own here.) It is certainly done differently at universities in other European countries. They could move to postgraduate courses only and concentrate on research and other teaching initiatives, moving away from undergraduate courses. It wouldn’t break the stranglehold of the independent sector and the domination of just a few schools on admissions but it might help.

September 2022 reading list and notes Recommended: an eye-opening vision of the future of humanity Nomad Century by Gaia Vince What We Owe The Future by William Macaskill Don’t Put

October 2022 reading list and notes Recommended book of the month Flying Blind: The 737 MAX Tragedy and the Fall of Boeing by Peter Robison To Live by Élisabeth Revol Chums: How a